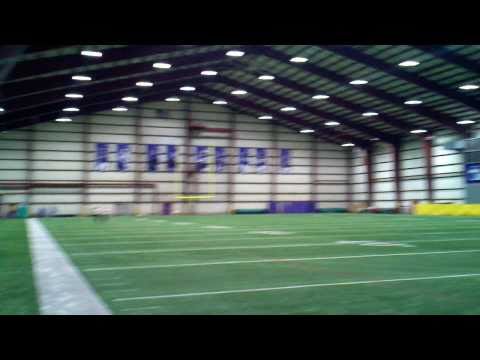 I recently had the opportunity to tour Winter Park, the Minnesota Vikings headquarters and training facility. The following video is of the Vikings indoor practice field. It was all I could do to restrain myself from running around. I would really love to play a game there. 🙂 Like Minnesota Vikings Chat on Facebook for my Vikings content. Minnesota Vikings Indoor Field from David Erickson.

This is so very cool. Ever wonder what’s being said on the field between players? This is six full minutes of Brett Favre‘s on-the-field chatter during the Vikings vs. Lions game. Found at YouTube from SOCOMSGREATEST via Rex Sorgatz at Fimoculous.

Rachel Nichols reports on the Vikings and Steelers pregame preparations. Found at ESPN.

This is great! A re-enactment of the final play of the Vikings game against the 49ers when Brett Favre hits Greg Lewis in the back of the end zone to pull out a victory with twelve seconds on the clock. Found at YouTube from MrNFL.

ESPN’s interviewing a teenager who catches for Brett Favre, supposedly because of the kid’s keen insight into Favre’s throwing mechanics. Seriously.

You thought this was over? Silly person.

While the Rick Schwartz‘s Yahoo Sports report that Favre had decided to remain retired was widely reported, given Brett Favre‘s history, many were skeptical. It’s a wonder the Yahoo Sports report wasn’t dismissed outright with a chuckle and a dismissive plllllleeeeeze.

ESPN countered with the Favre Xrays being sent to Vikings headquarters at Winter Park:

And, thus, the Brett Favre saga was set in motion once again. But former Strib and current ESPN.com writer Kevin Seifert is throwing up his hands over the story:

This story has spun totally out of control, and I’m not sure if I can make reasonable sense out of it anymore. Schaap’s report suggests Favre’s medical records were sent to the Vikings ON THE SAME DAY that a Yahoo! Sports story reported that Favre told coach Brad Childress he doesn’t want to play in 2009.

The NFL Network’s Total Access claims, defensively, “We really have no choice but to bring you the back and forth developments.”

At the Star Tribune, columnist Patrick Reusse devotes column space to the obvious: Brett Favre is manipulating the media to shine the spotlight on himself. Fellow columnist Sid Hartman goes into full We Don’t Need ‘Em mode by focusing on Sage Rosenfels. And beat writer Judd Zulgad, in order to pressure the team to issue some definitive statements, unleashes the fans on the Vikings by opening up blog comments on the topic.

On the other side of the river, St. Paul Pioneer Press columnist Tom Powers rails against the tight-lipped Vikings, fellow columnist Charley Walters says the Vikes look bad in this Favre saga, and beat writer Rick Alonzo filed the It Ain’t Over Yet story with a quote from Vikings Middle Linebacker E.J. Henderson:

“I think it’s good to have that resolution so we can just move on and focus on us, and focus on getting ready for the season without all these outside distractions,” said linebacker E.J. Henderson after the Yahoo! Sports report. “I definitely think it’s good to have a resolution, if there is one. But who knows what the personnel guys, and the guys we’ve got upstairs, what they’re going to end up doing?”

WCCO TV’s Mike Max says things are still hot and heavy between Favre and the Vikings.

I’ve collected a handful of videos of YouTubers responding to the Brett Favre to the Vikings story at my Videolicious.tv daily video blog.

ESPN has camped out at Winter Park, so Brett Favre to the Minnesota Vikings appears to be the story of the NFL offseason.

ESPN’s John Clayton addresses some of the issues were Favre to wear purple this season, Gene Wojciechowski is all for Farve playing in Minnesota, while former Strib beat writer Kevin Seifert points to what the story says about the Vikings’ current quarterback situation:

More than anything, this facet of the story illustrates how far down the plank the Vikings have already walked. We’re in the second week of May, and they are shopping for a new starting quarterback. The simple act of setting up a meeting with Favre sends a mixed message, at best, to the two quarterbacks they had planned to pit in a training camp competition. Simply by virtue of Tuesday’s story, Tarvaris Jackson and Sage Rosenfels already know they’re on the brink of being pushed aside — at least for one year.

From this vantage point, it seems the Vikings have boxed themselves into a situation that mandates an agreement with Favre. They’re in no position to make demands, including offseason attendance. If Favre walks away, or if the Vikings move on because he won’t accede to their requests, Childress would be left with the unenviable task of rebuilding the trust of his remaining quarterbacks.

Jared Allen pipes in and likes the idea of Favre in the locker room:

NFL.com columnist Vic Carucci discusses what the move would mean to the the Vikings/Packers rivalry, NFL Total Access did a segment on the risk versus the reward of landing Favre, and Steve Mariucci gives his take.

Sports Illustrated‘s Don Banks is sick of it:

It’s beyond tiresome by now. Let’s face it, it’s sad and kind of pathetic that we’re once again being sucked into another Brett Favre watch. What are we up to now, four, five summers in a row with the same basic storyline: Will he play or won’t he? The indecision of the man has become as legendary as his football feats, and infinitely less entertaining.

â€œI try not to get too caught up in it because I donâ€™t want to get too overexcited, thinking that heâ€™s coming and then all of a sudden he doesnâ€™t,â€ Berrian said. â€œHe would be a great addition to the team. Heâ€™s a great player. Heâ€™s done so much for the NFL by himself. He definitely would bring leadership to the team.

â€œHeâ€™s been in the league for 17, 18 years and to have a player of his caliber come in, it speaks volumes for what he can do for this team.â€

“From an X’s and O’s standpoint, it would be perfect,” said Bercich, an analyst for KFAN-AM and a former Vikings assistant coach. “They’ve talked about how, in New York, they used him a lot. They might have overused him, maybe. I guarantee you Childress is either going to show him the film or talk to him about how with (Peterson) standing behind him, he’s going to get a lot of one-on-one coverage. He’s one of the best play-action passers there ever was.”

“It’s the same verbiage, same terminology,” Gannon said of the Vikings’ offense and the Packers’ system. “The comfort level is so important for a quarterback like that. What they did last year, in New York, they bastardized the system. They made all kinds of changes and tweaks. Everyone had to learn different stuff, because of Brett. He’d audible, and he’d be referring to the old terminology.

“Stepping into this system, with the great running game, and the solid defense… just manage the game, and take care of the football, there’s no reason he can’t win 11 or 12 games.”

Darren Sharper thinks it’s a good idea, too but Nick Barnett says the move would make Favre a traitor.

WCCO TV’s Esme Murphy covers the chatter, online and off, about the Favre story while Jason DeRusha reports on the financial impact Favre’s purpleness would mean to the team.

The Brett Favre annual offseason drama continues with ESPN.com’s report yesterday that Brad Childress will meet with the 39-year-old quarterback with a torn biceps tendon and questionable motivations to discuss his future as a Viking.

The Strib confirmed the ESPN story last night. Star Tribune reporters Chris Miller and Judd Zulgad discuss the topic in a Web video but, stupidly, the paper doesn’t allow you to either embed the video or link directly to it, so if you want to watch it, go directly to the Strib’s Vikings section.

Incumbent starter Sage Rosenfels is burying his head in the sand and Strib columnist Jim Souhan doesn’t want Favre because:

There are lots of good reasons for coaxing a future Hall of Fame quarterback out of retirement. As long the Vikings don’t think one of them is an aging Favre’s ability to propel his team to the Super Bowl, then, what the heck? Sign Favre, watch the fireworks, and understand that this January, Favre might wind up looking all too much like a cross between Brad Johnson and Tarvaris Jackson.

Even if you hate the idea of Favre joining the Vikings, think of the excitement it would create. This is exactly the type of kick-start the Vikings need in this tough economy. Interest will go off the charts.

But more important than any intangibles is the simple fact that he is a better quarterback than anyone the Vikings have on their roster. Favre is better than what they have, he won’t cost any players or draft choices in return, and they have the money to pay him. Signing him should be a no-brainer.

And, to round out the Favre coverage, PiPresser Charlie Waters envisions a bundle that includes both Favre and former Packers teammate, right tackle Mark Tauscher.