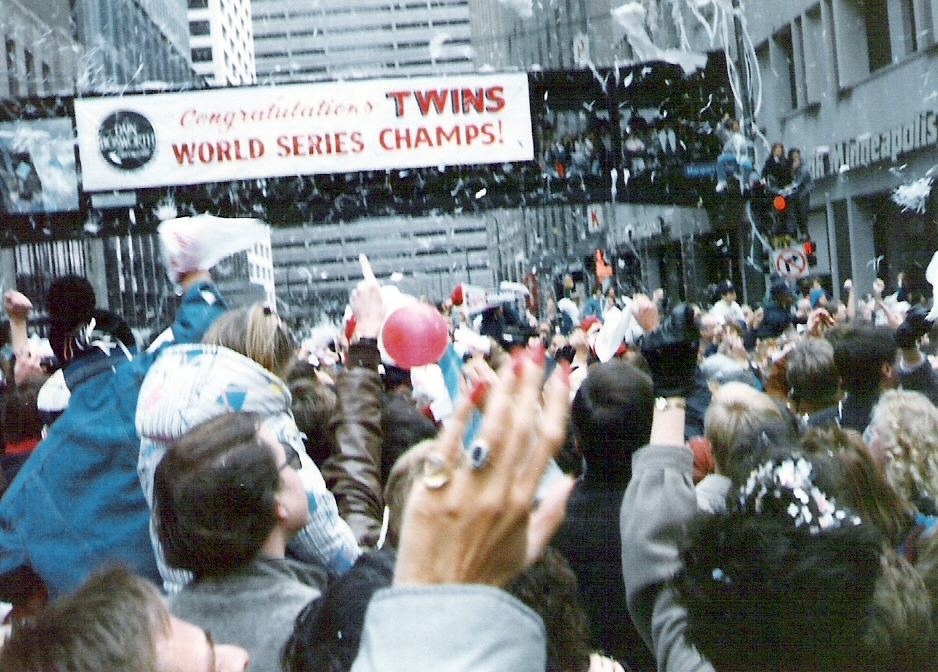 A couple weeks back I saw a brief clip on Vikings Weekly where former Vikings running back Darrin Nelson was asked how he thought fans remembered him.

Nelson said he thought fans remembered him as a fast back with good hands. I, of course, snorted “Nooooo, fans will remember you for The Drop.”

The Drop being the pass thrown to him (that went into and out of Nelson’s arms) at the goal line by quarterback Wade Wilson on January 17, 1988, with 56 seconds left in regulation of the 17-10 NFC Championship Game against the Washington Redskins. Had Nelson scored and the Vikings converted the extra point, the game almost certainly would have gone into overtime, with the Vikings having a chance to return to the Super Bowl for the fifth time.

It would take another decade for the Vikings to get so close to the big game.

For 20 years, one month and sixteen days I have laid the blame of that loss solely at the feet of Darrin Nelson. I am not alone. Most Vikings fans I know who watched that game blame Nelson as well.

But now I know I owe Darrin Nelson an apology. I’m sorry. I was wrong and I apologize.

I recently watched an NFL Films piece on the NFL Network about the Washington Redskins’ historic season that clearly demonstrated that I was wrong.

In 1987, the NFL players went on strike after the second week of the season. The league scheduled games and arranged for replacement players to play them. Tony Adams, a backup for the Kansas City Chiefs for four seasons nearly a decade before, came out of retirement to play as a scab for the Vikings. The Replacement Vikings were miserable.

The real Vikings returned to work after three games boasting a roster loaded with talent:

That roster was able to overcome the devastating three divisional losses served up by The Replacements to gain a Wild Card berth and blow away both the Saints (44-10) in the Wild Card game and the dynastic San Francisco 49ers (36-24) in the divisional playoffs.

The Redskins’ season began with coach Joe Gibbs nearly trading castoff quarterback Doug Williams but having a last minute change of heart because he had a gut feeling that somewhere down the line, Williams would help them get to the Super Bowl that year.

Unlike the Vikings, the Redskins scabs won all three games they played, so Washington was well positioned for a playoff run.

Williams was protected by an outstanding offensive line that included Jeff Bostic, Russ Grimm and Joe Jacoby and among his trio of receivers, “the posse,” was Art Monk. On the defense, the Skins boasted the fastest man in the NFL in defensive back Darrell Green, and defensive ends Dexter Manley and Charles Mann.

Doug Williams was selected by the pathetic Tampa Bay Buccaneers with the 17th overall pick of the 1978 draft led the team to the playoffs the following year. Williams lead the Bucs to the playoffs twice more before an acrimonious contract dispute prompted him to leave the NFL for the newly-formed United States Football League. The experience left him feeling disrespected.

Tampa Bay would go to become a perennial loser and laughing stock and it would take 14 years before the team returned to the playoffs.

After the USFL folded, Williams returned to the NFL as a backup for Washington quarterback Jay Schroeder. Schroeder was a prima donna whose position as starting quarterback nearly caused a mutiny within the team.

Schroeder eventually suffered an injury and Williams stepped in to lead the team for the final five games of the season.

Williams lead his team to a 21-17 victory over the NFC Central Division champions Chicago Bears in the NFC Divisional Playoff game. That victory set up the Conference Championship game against the Vikings.

The two teams had recent familiarity with one another by playing each other on the final week of the ’87 season, a game in which Skins eeked out an overtime victory. That was a close game so the Conference Championship figured to be no different.

The game was tied 10-10 into the fourth quarter but the Redskins pulled ahead 17-10 on the strength of a seven yard touchdown pass from Williams to Gary Clark.

Here is where we return to my original topic: Darrin Nelson.

The Vikings drove down the field and were down to their last chance on a fourth-down play in the red zone with 56 seconds remaining in the game. If they could score seven points, they could send the game into overtime with momentum on their side.

Washington defensive back Darrell Green figured you go to your playmaker when you absolutely must have a play, so he was going to cover Vikings wide receiver Anthony Carter with an eye toward him getting the ball.

The play Vikings quarterback Wade Wilson ran was designed to use Carter to clear the way for Darrin Nelson to score. The play unfolded on the left side of the end zone with Nelson running a crossing route at the goal line and Carter clearing the way by running Green off to the deep corner of the end zone.

The problem was that Carter ran a comeback route directly into Nelson’s route. Nelson had his defender beat, but Carter’s broken route brought Darrell Green into the play. All Green needed to do was play the ball, which he did, knocking it from Darrin Nelson’s arms.

Nelson did not drop the ball; it was knocked out of his hands. It’s on the tape. UPDATED 01/31/11: You have to watch closely, and the play is at the very beginning of this clip but there’s no replay, but you can clearly see Anthony Carter right next to the play, having pulled his defender into Nelson’s route:

So, again, I apologize Darrin Nelson.

The Redskins, of course, went on to win Super Bowl XXII. And Doug Williams made history by becoming the first black quarterback to not just play in a Super Bowl but win it and win it impressively in a 42-10 route over John Elway‘s Denver Broncos.

For his performance, Doug Williams won the game’s MVP honors.

It would take 12 years for another black quarterback to play in the Super Bowl when Steve McNair’s Tennessee Titans came within a yard of tying up the score on the last play of the game against the St. Louis Rams during Super Bowl XXXIV in what to date has been the most exciting Super Bowl ever played.

Were it not for Darrell Green’s play, Steve McNair may have been the trailblazer.

Visit Minnesota Vikings Chat for daily coverage of the Vikings.